Calisto discusses how indie publishing gave her the freedom to explore out-of-the-box ideas, her greatest publishing and printing challenges, and her advice for aspiring authors.

Veronica R. Calisto is a Colorado-based writer whose uproarious and unconventional superhero series obliterates all expectations — in both its content and biting humor. In Book 1 of The SparkleTits Chronicles, what starts off as the worst day imaginable for protagonist Greer Ianto ends with her gaining delightfully odd super powers — a beacon of mesmerizing light that emanates from...well...based on the title of the series, you can probably guess!

We sat down with Calisto to discuss how indie publishing gave her the freedom to explore out-of-the-box ideas, her greatest publishing and printing challenges, and her advice for aspiring authors.

1. What drove you to publish your books with an indie publisher instead of going the traditional route?

This is not going to be a treatise on the EVILS OF TRADITIONAL PUBLISHING, because I know there are enough of those out in the world. Potentially the same number that lambaste independently published works as “not good enough to make it” in the traditional world.

Both views pit authors against each other, when we should recognize the rising tide raises all boats. We are all in this together. This person’s success does not diminish my own. Books are good. Yay books.

Now, at the time I decided to indie publish, I had enough friends who published traditionally and/or independently to understand the pros and cons to each approach. I had written twelve or thirteen books (some that are so bad I only use them to make myself feel better about my writing abilities now), so I finally felt to the level that someone might want what I had to offer.

I started querying, while also working on other projects, because it is always good to produce more and hone skills.

I started on yet another new work and it was fighting me. I didn’t know what the big problem was until it occurred to me that I was adjusting some of the world/characters/etc. to fit the traditional market.

This is a recognition that traditional publishers are businesses, and taking on new authors are financial risks. And my ideas tend to run a little weird, so I understand my work can be a risk a traditional publisher is unwilling to take—hence, considering how to conform to that market.

When I came to the realization that I was unwilling to conform some of the weirder things, I decided to indie publish. That decision broke through the issues I’d been having in the story. Any time I’m having that kind of conflict in writing, and the idea of indie publishing the work breaks the brain freeze, I indie publish that work.

2. What are some challenges you encountered during the publishing process?

The biggest challenge is the ever present questions, “Am I good enough? Is this work good enough? Who do I think I am that I’m trying to put a book out into the already expansive market?”

Getting past those, the next issue is figuring out all the steps involved. A lot of people will tell you what to do, but some of them don’t have your best interest at heart.

So, there was a lot of research involved for all the steps. And to be frank, it’s not cheap. Traditional publishing pays for the editors, book cover, formatting, and marketing to an extent. If any of these items are not in an author’s skill set, they need to pay for those.

Quick note: Even if editing is not in a person’s skill set, it should be outsourced because we read what we intended in our writing, not what is there.

3. How did you choose your book printer? What was the biggest challenge, surprise, or joy when printing your book?

Thankfully, several of my friends had already published some of their work, so I was able to interview them about the pros and cons between the printers and the user interfaces in uploading a book:

How easy it is to order author copies, or for stores and libraries to do the same? If you want hardcover, who does hardcover? What about customer service when things go wrong?

There’s also the question of paper quality and printing clarity. Having friends with physical books I could touch and smell and feel and taste...or whatever...weighed heavy in the choice of what to do and where to go.

The biggest joy is opening that box for the first time for each new book. The cover is so pretty, and it smells so good, and you made it. It’s yours. You have created a whole precious thing and it’s real.

4. How did you choose the cover design for your book? What was the process like?

Back in the times before COVID, I spent a lot of time in bookstores. Yes, a lot of it was feeding the addiction, because books are so pretty and I always want more. Or, those times when you have a bad day, and you just want to be surrounded by books and not be bothered by the world.

However, when it is the third bookstore of the day and I’ve already bought more than the book budget for that paycheck, I traveled the aisles just looking at covers in the genre I write in. It’s market research.

Look at what is hot right then. What things catch the eye. Are there disparities between men and women authors and the covers attached to their names?

With all that information in my head, I started considering what kinds of things in my story I would want displayed, and how that meshed with the tropes in the covers already out there. I also considered how to stand out on the shelves. The balance is an interesting one.

Cover designers are doing the same kinds of market research. So, they frequently have input on what things will work better or worse for a market. Depending on if you’re buying a premade cover or a custom, you can work with the designer to create something new or you can purchase something premade for the market.

The items that I’ve published are urban fantasy. The genre has a lot of dark covers, so I specifically wanted covers with lighter backgrounds that still spoke to magic and things that are still in the darker covers.

5. What are your main methods for marketing your books?

My main methods for marketing the books are conventions, Facebook, and word of mouth.

Frequently, all it takes is a mention of my superheroine SparkleTits to have people at least ask a follow-up question.

6. What advice do you have for self-published or small-press authors?

Connect with other authors, indie and traditional. Other authors are the only ones who will understand all the people going on in your head. They’re who you can bounce ideas off of, who can connect you with opportunities for marketing and speaking. They are your people.

Also, have your work edited by someone other than yourself. Super important. Inevitably, errors will make it through because they are sneaky.

7. What book should everyone read right now and why?

I can’t choose just one, so I’ll give a few for different reasons.

Playing with Fire by R. J. Blain. The main character turns into a fire-breathing, meat-eating unicorn. So much fun.

Trying to Live with the Dead by B.L. Brunnemer. YA paranormal. The found family in it heals wounds in the soul.

White Trash Warlock by David R. Slayton. If the title isn’t enough to pique your interest, are you even alive?

And of course, in a shameless plug, Starfish and Coffee, the first of the SparkleTits Chronicles by me, Veronica R. Calisto. Because who doesn’t need a new superheroine in their lives, especially one who bends a lot of the normal superhero tropes?

Veronica R. Calisto is best described as a walking musical who might also be a figment of her own imagination. In normal years, she is a massage therapist, member of a pagan chamber choir, as well as an active participant at local conventions and writing conferences. This year has been a bit odd, so she spends most of her time lavishing on a nest built of her books, and creating new worlds that twist our assumptions about our own. Follow Veronica R. Calisto on Facebook to stay updated on her newest books > 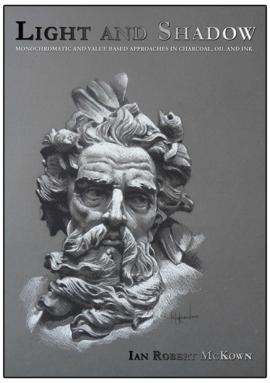 In early 2013 I approached Steuben Press on a book project I'd hope to get off the ground. I was referred to them by another business entirely, which I think is a credit to how Steuben Press is seen amongst their competitors. The project was a 120 page, full color art book that came out amazing. They under promised and over delivered a great book which I’m happy to report is already on its third printing. I have and would recommend Steuben Press to my friends and other self-publishers.

See Ian’s incredible artwork and buy his book at www.ianrobertmckown.com